Statistical assessment of reliability and validity

Assessment of the reliability and validity of a measurement method is a multi-faceted undertaking, requiring a range of statistical approaches. Reliability and validity are quantified in relation to the intended practical requirements of the measurement tool (Atkinson & Nevill, 1998). Validity and reliability can be assessed in either relative or absolute terms, as described in Table C.7.1. Statistical approaches used to assess both the association (relative) or agreement (absolute) between two sets of data in studies of reliability or validity are described in the following sections.

Table C.7.1 Relative and absolute forms of reliability and validity.

A statistical test can be performed of the null hypothesis that the true correlation is zero but this is less useful for assessing reliability and validity. It is to be expected that two measures of the same phenomenon are related to some degree. Even small numerical values of the correlation coefficient could appear to be “statistically significant” (e.g. p<0.05) if the sample size is large. In addition, two methods may also have correlated error (e.g. two self-report instruments) which would inflate the correlation between them. Correlation coefficients and their significance should therefore be interpreted with caution in the context of reliability and validity.

Examples of correlation coefficients used to assess reliability and validity include:

It is possible that measurement methods are strongly correlated but have very little absolute agreement. Correlation coefficients are not able to detect systematic bias (Schmidt & Steindorf, 2006). However, absolute validity or reliability may not be required depending on the research question. One example would be when only accurate ranking of individuals within a population is required, such as in a study examining whether a measured lifestyle exposure is or is not associated with a disease (Masson et  al, 2003). In this type of study, a method with high relative reliability and validity as demonstrated by a high correlation coefficient may be suitable; if the purpose of the study were to determine the exact dose-response relationship, relative validity of the method used to measure the exposure would not be sufficient.

Unlike the correlation coefficients discussed above, which describe the association between two variables, the ICC describes the extent of agreement (Müller & Büttner, 1994). The variables can either be from replicate measures using the same method (reliability), or from two (or more) methods measuring the same phenomenon (validity). Since the ICC describes agreement between variables, it is typically used to determine absolute reliability or validity.

The ICC can be affected by sample homogeneity; if a study sample is highly homogeneous, it is more difficult to distinguish between individuals and the ICC would be comparatively lower than if the same measurements were compared in a more heterogeneous sample.

Linear regression using least squares is the most common method but other types of regression exist (Ludbrook, 2010). Regression models used to assess validity may have multiple independent input variables. Similarly, non-linear relationships can be modeled using non-linear transformations of one or more of the included variables in a regression model.

Values of two replicate measures (reliability) or from two methods (validity) can be plotted in a scatterplot: one variable (the independent or predictor variable) on the x-axis against the other variable (the dependent variable) on the y-axis. Figure C.7.1 shows examples of scatterplots with the best fitting straight line obtained from linear regression as a dashed line in each plot. The equation of the best fitting regression line is shown on the form y = mx + c; the line of unity (y=x) is also included as a solid line. The slope (m) represents the expected increase in y if x were to increase by one unit, the intercept (c) is the expected y value when x = 0. For absolute reliability and validity, the expectation for perfect agreement is a slope of 1 and an intercept of 0 (Hopkins, 2004).

Suppose that validity of the variable on y-axis is of interest. Its systematic error in reference to the other on x-axis can be described using the intercept and slope of the regression line:

Uncertainty in a regression model

Uncertainty in parameter estimates from a regression is an important consideration (Twomey & Kroll, 2008). Uncertainty increases when:

Errors of one method against another (reference) can be described by the root mean square error (RMSE), i.e. the square-root of the mean squared differences between methods. It is also a commonly used statistical measure of goodness-of-fit in regression. This statistic amplifies and severely punishes larger errors. A lower RMSE indicates greater agreement at individual level.

The agreement between two continuous variables (A and B) in the same units from replicated measures using the same method (absolute reliability), or from different methods (absolute validity), can be assessed using Bland-Altman plots (Bland & Altman, 1986). The difference between each pair of values (A-B) on the Y axis is plotted against the mean of each pair ((A+B)/2) on the X axis (Figure C.7.2). Alternatively, the difference between each pair of values can be plotted against just one of the variables (a criterion method) on the X-axis. The purpose is the same; to examine differences between measurements across the range of (true) underlying values of the quantity of interest.

Assessing reliability or validity in this way provides: 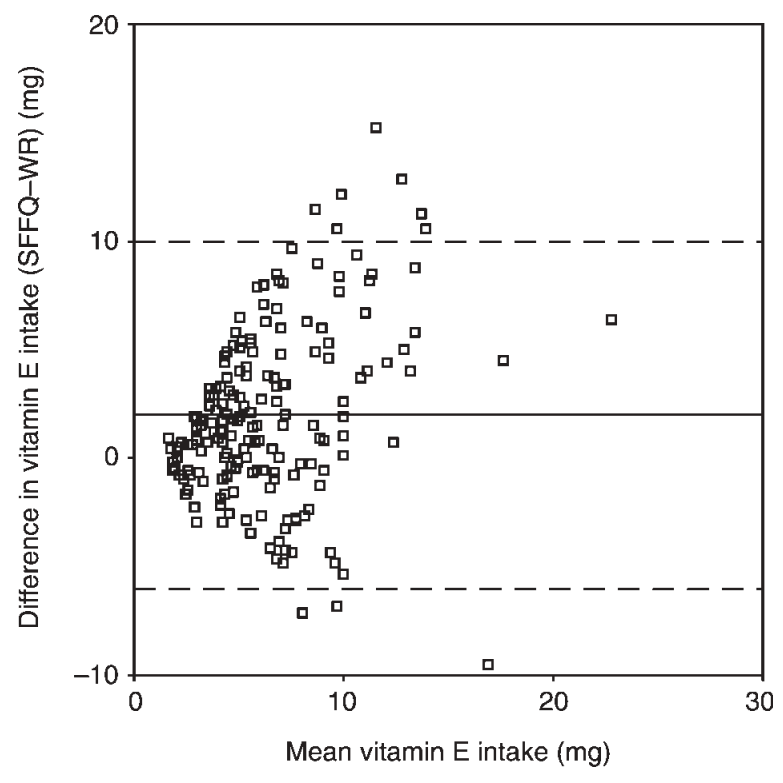 Cohen’s kappa K is a measure of agreement between two categorical variables; it is commonly used to measure inter-rater reliability (McHugh, 2012), but can also be used to compare different methods of categorical assessment (e.g. validation of a new classification method). It improves upon percent agreement between scores by taking into consideration the agreement we would expect due to chance (i.e. if the two measurements were unrelated).

Other kappa statistics include:

A receiver operating characteristic curve can be used to optimise a binary classification (two categories) from a continuous variable. A ROC curve illustrates the effect of varying the discriminatory threshold for the classification by plotting the true positive rate (sensitivity) against the false positive rate (1 - specificity).

The area under the curve (AUC) is a measure of the ability of the continuous variable to inform the classification; an AUC of 1 means perfect classification and an AUC of 0.5 is equivalent to flipping a coin, thus indicating the lower boundary of actual information above chance (Hanley 1982).