FCD are important for dietary research as well as for use in nutrition policy, clinical and public health practice, and by the food manufacturing industry. They are used for national programmes for the assessment of diet and nutritional status at a population level, and also in nutrition labelling.

Different countries have FCDBs that are appropriate and relevant to the foods consumed in that setting.

For instance, in the UK, the commonly used FCDB is McCance and Widdowson’s “The Composition of Foods”. Since 1940 this has been updated several times, and the latest in the update is the 7th Summary Edition  [1]. This version provides comprehensive data on all food groups and includes nutrient data for over 1,200 of the most commonly consumed foods in the UK. Also available as McCance and Widdowson’s 'composition of foods integrated dataset' (CoFID) online via the UK Government website.

In the United States, the United States Department of Agriculture (USDA) provides FCDBs relevant to American diets. Similarly, other countries have their own FCDBs, with key information about them often available via the internet.

Foods from these national FCDBs can now be identified by International Food Code (IFC).

Understanding issues in the use of food composition databases

In nutritional research, FCDBs are critical to converting reported food intakes into energy and nutrients. It is important to understand their potential limitations.

The potential sources of error in food composition values may be random or systematic, and all such errors add additional uncertainty to the calculated nutrient intakes [2]. Limitations in the use of food composition databases can involve the following seven domains:

Food composition values represent the total amount of the constituent in the food, rather than the amount actually absorbed in the body. As a consequence, the potential bioavailability of nutrients in the local diet should be considered when nutrient intake data are assessed.

2. Natural variability in the composition of foods

Foods exhibit natural variation in the amount of nutrients they contain. The level of certain nutrients in some foodstuffs will not differ between countries, but for other nutrients, factors such as those listed below may affect nutrient content [3]:

In addition, recipes for the same composite dish may vary both within and between countries, as might fortification practices (e.g. the fortification of flour and breakfast cereals). For example, in contrast to many European countries, the selenium content of foods is higher in the United States and Canada due to the higher selenium levels in the soil, while levels are particularly low in New Zealand. Ideally, each country should compile its own food composition database.

The nutrient composition of meat products can vary greatly depending on the proportion of lean to fat tissue. The ratio between the two also affects levels of most other nutrients.

Storage conditions can affect the water content of plant foods. Changes in water content are associated with changes in all other constituents mainly as a result of changes in nutrient density. Trace elements are affected by husbandry conditions, soil composition and fertiliser use.

The natural variation in the nutrient content of cereal products (e.g. flours and grains) is less than that in fruits and vegetables. However, as with other foods, fertiliser and soil type produce some variation in mineral contents. Different fortification practices in some countries markedly affect micronutrient levels such as B vitamins, folate, iron and calcium. For example:

Nutritional contents of processed foods and composite dishes vary substantially. Nutritional contents of processed foods change in formulation and production. The introduction of reduced-energy, low fat or low-salt versions of standard foods would require FCDBs to be updated. Common foods such as mayonnaise, muesli and sausages vary by brand. Many supermarkets have introduced their own brands with different formulations and fortification levels. Composite dishes show great variation mostly due to differences in recipes and actual cooking methods.

5. Coverage of food items and nutrients

The number of dietary items (e.g. foods, meals, and supplements) and nutrients or other food chemicals can vary widely by the database.

It is unlikely that a database can be comprehensive for more than a short period. New foods are constantly introduced to the market. Although modern databases can hold information on a large number of different foods, only a limited number of foods can be practically included in a database.

Ideally, food composition databases should include complete data on all nutrients known or thought to be important to human nutrition. However, this can rarely be achieved. Factors such as the availability of reliable analytical methods, the availability of existing data, health concerns in a given country (and hence priorities given to certain nutrients) as well as national and international labelling regulations are all determinants of the coverage of nutrients in a database.

Nutrition values declared on food labels include a tolerable margin, and as such, using values obtained from food packaging may add a degree of error to the food composition databases. Furthermore, some countries have different guidelines. In the UK the acceptable level of tolerance permitted for macronutrients decreases as the level of the macronutrient in a product increases (see Table D.1.12).

Note 1: For those values above 5% seasonal/natural variability should be considered for meat.
Note 2: For wholemeal cereal products and saturated fats, higher tolerances may apply.

A number of variations in terminology and analysis between countries can result in different values for nutrients for the same food and hence total intakes. The most notable of these are carbohydrates and dietary fibre.

In many countries, including the United States and most countries in Europe, carbohydrate is determined ‘by difference’ as the remainder after subtraction of the values for protein, fat, water and ash from the weight of food.

In other countries, such as the UK, carbohydrate is the sum of the components of carbohydrate subtypes, namely starch and sugars, added together.

These two approaches give different values for many foods, particularly those containing dietary fibre and more complex types of starch. Moreover, the energy values applied to carbohydrate also varies, in most countries being a value of 4 kcal/g, whereas in the UK the value applied is the monosaccharide equivalent of 3.75 kcal/g. Hence the same value of the carbohydrate content of food will have a different energy value, and diets will have different energy values between countries using one method versus the other. These differences are often not appreciated in international comparisons.

Fibre content is analysed in most countries by the Association of Official Analytical Chemists (AOAC) [4, 5] to give a value for total dietary fibre. There are different AOAC methods available; the older methods (AOAC 985.29 and 991.43) capture non-starch polysaccharides, some resistant starches, lignin and some inulin, but they do not measure most non-digestible oligosaccharides [6, 7]. A newer method of analysis is now available (AOAC 2009.01) and able to determine more components [8, 9].

The Scientific Advisory Committee on Nutrition (SACN) recommends a new definition of dietary fibre be adopted in the UK where dietary fibre should be defined as all carbohydrates that are neither digested nor absorbed in the small intestine and have a degree of polymerisation of three or more monomeric units, plus lignin [10]. Since 2015, it is recommended that the dietary reference value for the average population intake of dietary fibre for adults should be 30 g/day, contrary to the previous dietary reference value of 18 g/day of non-starch polysaccharides defined by the Englyst method, which is equivalent to about 23-24 g/day. The SACN recommendations are measured using the AOAC methods. In some countries, the method of Englyst et al. is used to measure dietary fibre [11].

These give different values for most foods, those for total dietary fibre being generally higher than non-starch polysaccharides. The fibre method used should always be specified in publications reporting dietary intakes.

In recognition of the need to increase comparability in food composition information from different countries, a number of collaborations and networks have been set up. Examples include 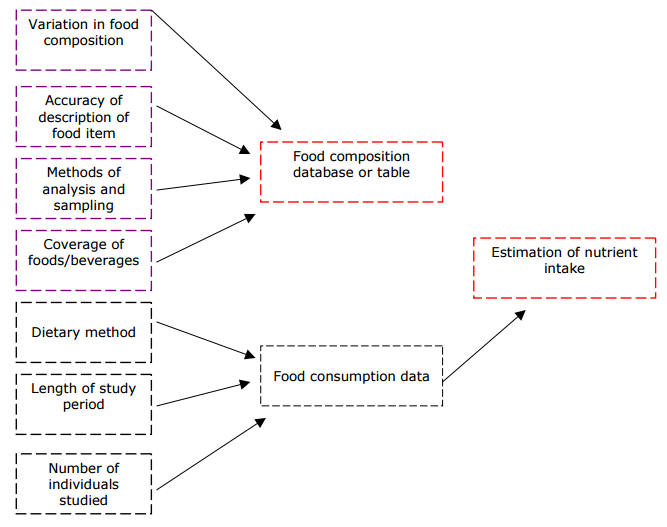