The method assesses food and beverage consumption during the previous day or the preceding 24 hours. The variety of outcomes assessed by 24-hour dietary recall is shown in Figure D.2.9.

To capture habitual consumption of foods, multiple recalls are essential. The more days of recall, the better capture of between-day variability, seasonal variability, and foods episodically consumed. In a preliminary study to decide the method for the UK Low Income Diet and Nutrition Survey (LIDNS), four repeat 24-hour recalls were recommended as the most appropriate method of dietary assessment [11]. In an Australian study in adults, eight repeat 24-hour recalls were recommended to capture the variation in macronutrient intake [12]. The number of recalls needed to assess individuals’ exposure to nutrient intake can be statistically calculated, ranging from 3 days for major macronutrients to weeks for micronutrients.

* possible when repeated measures were collected over time.

The 24-hour dietary recall is a retrospective assessment method carried out by a trained interviewer. This method can also be self-administered with no interviewer. The 24-hour recall is normally undertaken in chronological order of consumption (i.e. from morning to night). The multiple pass approach has been often used as described below.

The multiple pass recall is a staged approach to the dietary recall thought to be more tailored to human cognition than the chronological approach. The Multiple Pass Method has been widely used in national surveys and research [17]. The following is an example of the 5-step approach. The exact stages or passes may vary between protocols.

An example of a 24-hour dietary recall entry sheet used by an interviewer is displayed in Figure D.2.4. Note that entry can include “food code”, which can later facilitate data entry. 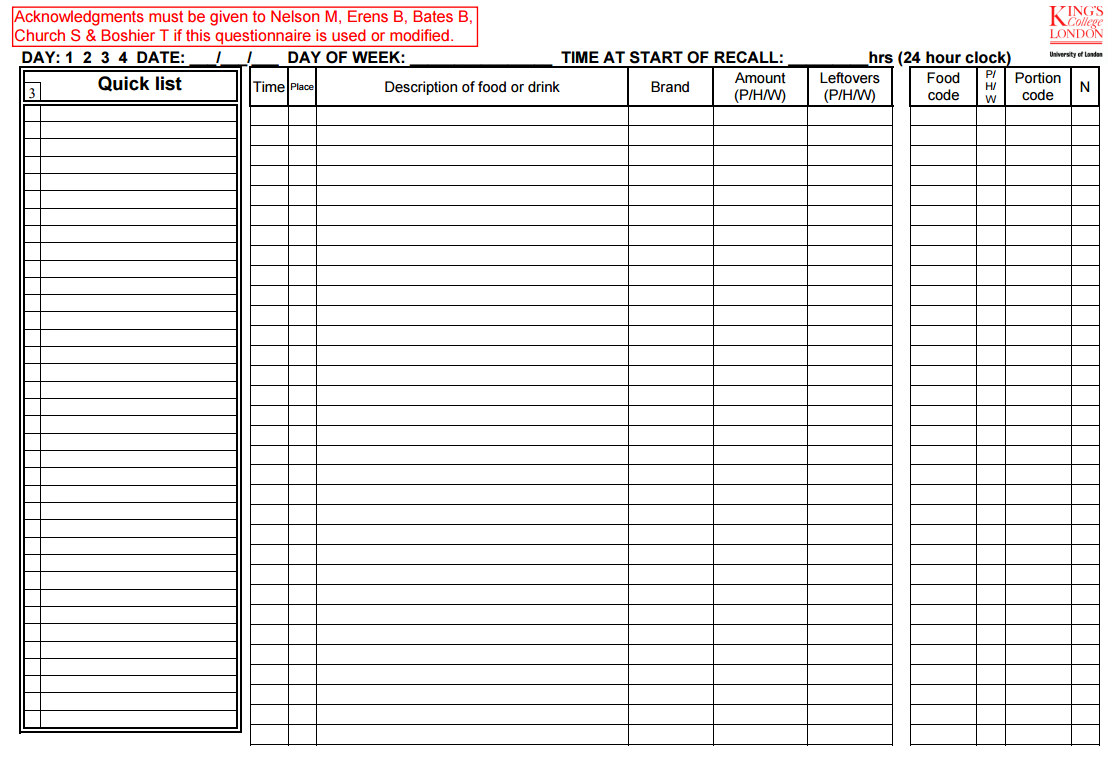 Ideally, on the day previous to the 24-hour recall assessment, the respondent needs to be uninformed about its implementation, so that dietary behaviour is not affected. For example, in the US national survey [1], two 24-hour recalls are conducted. The first one is through a face-to-face interview. The second one is conducted by an assessor over the phone. The respondent is informed that a phone contact is attempted approximately two weeks after the first 24-hour recall, but not informed which day is selected to avoid a respondent changing his/her dietary habit.

In an interview, aids to recall occasions during the previous day can be provided, including information on the weather, local news, local events, etc. It is also useful to undertake a short questionnaire to supplement the recall data. The questionnaire may ask about the type of staple foods usually used, e.g. bread, milk, margarine, and breakfast cereal, to save time recording this information each time it appears in the recall.

As a part of the 5-step approach, a participant should be guided to recall dietary items often forgotten. Those items include ingredients used in cooking and during consumption, snacks between mealtimes, and dietary supplements. A participant should also be guided to answer whether the day they reported was a usual day, whether they follow a special diet or not (e.g. vegetarian diet, dieting to lose/gain weight, for a disease or for lactose intolerance).

Whether foods were purchased outside or cooked at home, brands of purchased foods, and how much money was spent may also be answered. What variables are to be captured in the 24-hour assessment should be confirmed before its implementation.

The time interval(s) between multiple 24-hour recalls should be considered depending on the purpose of the study. If the purpose of the study includes the habitual intake over a year, then 24-hour recalls should be administered across all seasons within the year to account for seasonal variation. In some cases, it is considered useful to use a hybrid between a 24-hour recall and an food frequency questionnaire. The hybrid (for examples see below section) covers the intake over the previous day but includes questions of specific food items with frequencies (usually semi-quantitative). These tools are especially useful in large-scale studies where the use of interviewers is not practical but a higher amount of precision is desired compared to classical FFQ.

The interview can be carried out in person, by telephone or increasingly via the Internet. In the Norwegian arm of the EPIC study, no significant differences in the dietary data obtained were found when face-to-face 24-hour recalls were compared to telephone 24-hour recalls [8].

Computer-based 24-hour recall, including that via the Internet, has the following advantages:

Examples of this approach include INTAKE24 and Oxford WebQ, as described in Technology Assisted Dietary Assessment.

The estimation of portion size in the 24-hour recall usually requires the use of aids such as:

If none of these methods applies to a certain food item that a participant consumed, the participant might refer to the size of the item e.g. small, medium, big; and then depending on the specific item, the size can be converted to an approximation of the weight.

When is this method used?
How are estimates of diet derived?

As a 24-hour recall has an open-ended format, outcomes from 24-hour recalls can be diverse, including consumption of specific food groups, cooking at home, eating meals with family members or alone, use of table salt, use of dietary supplements, and whether a respondent consumed breakfast, takeaway foods or snacks between meals.

Key characteristics of single and multiple 24-hour recall are described in Table D.2.10.

Considerations relating to the use of 24-hour dietary recall for assessing diet in specific populations are described in Table D.2.11.

The use of 24-hour recalls is particularly challenging in young children and the elderly. The ability of a child to provide a dietary recall increases markedly after the age of 8 years [14], while the ability of younger children appeared variable [22]. For these reasons, in 24-hour recalls of diets of children and especially of younger children, their parents or caregivers are invited to assist the dietary reporting.

The use of prompts in small numbers of children aged 10 years has been investigated. Specific prompts were found to hinder recall compared to free recall [5]; an open interview format was preferable to a meal interview format [3]. It is not clear what order of recall, i.e. reverse order versus forward order, is preferable to use in children [3]. Recency was found to have a positive effect on children’s recall, which may mean it is preferable to inquire about intake during the previous 24 hours rather than the previous day [4].

One study in UK pre-schoolers has shown that repeat (x3 days) automated multiple pass recall (AMPR) is not valid at an individual level to measure energy intake when compared to energy expenditure using doubly labelled water; over-reporting was apparent [19]. A similar study was repeated in young school children and although inaccuracies were reduced, intakes were still only valid at a group level [19]. This concurred with an earlier US study in young children [13]. These studies all relied on proxy-reporters, like parents and carers.

Dietary recalls require a trained interviewer to undertake the dietary assessment in person or via telephone. The training of the interviewer is of utmost importance to ensure that the dietary data acquired is as reliable and valid as possible:

As mentioned above and introduced in Technology Assisted Dietary Assessment, computer-based 24-hour recall has been developed in recent years (as of 2020). The advantages include the followings:

As this example of the advancement of the computer-based 24-hour recall method, its development is about a system and an algorithm to facilitate recalls and data entry.