GPS and other GNSS receivers

Global navigation satellite systems (GNSS) provide a precise location at any point on the Earth’s surface. Global Positioning System (GPS) is the most widely used system owned by the US Government. Other systems include GLONASS (Russian) and Galileo (European).

GNSS data provide a measurement of position in three dimensions, i.e. latitude, longitude, and altitude. Time-series data of position yields speed, ascent/descent rates, and acceleration. GNSS data are most useful when combined with other behavioural exposure data in order to determine the spatial context of that behaviour. The dimensions of physical activity assessed by GNSS receivers are described in Table P.3.25.

Table P.3.25 Physical activity dimensions which can be assessed by GNSS receivers.

A dedicated GNSS receiver is carried by the participant. The monitor does not need to be attached to the body but needs to be in close proximity to the person under investigation (i.e. worn on a belt or carried in pocket or bag). A number of GNSS receivers are now available that can be worn on the wrist.

GNSS receivers estimate their position on Earth by triangulating signals sent from satellites orbiting Earth. The signals are exact time stamps of transmission, which are compared with the exact time in the GNSS receiver upon reception; the difference is the time taken for the signal to travel the distance from each satellite to the receiver, and since the speed of radio signals are a known constant, the distance can be calculated. As GNSS receivers have the satellite position schedule stored, each calculated distance identifies a number of possible positions on Earth. A minimum of three satellites is required to estimate the latitude and longitude of the receiver, and a minimum of four to also estimate altitude.

Dedicated GNSS receivers store 3-dimensional coordinates that can be exported and processed by dedicated software packages. Most smartphones also include GNSS receivers, although extracting data from them may be less straightforward.

GNSS is used when researchers want to know a participant’s location and/or route. GNSS can be combined with geographical information systems (GIS) which provide additional layers of data on the location, e.g. types of land use, crime levels, air pollution, etc. This allows examining, for example, which types of environments are more or less conducive to physical activity (e.g. in greenspace) or whether a participant is using particular geographical features of interest (e.g. new cycle routes, supermarkets, takeaways (Krenn et al., 2011)). When combined with objective time-stamped measurement of physical activity, GNSS can provide a greater understanding of where activity takes place and may even refine the classification of the type of activity being performed.

How are estimates of physical activity derived?

The raw measurement performed by a GNSS receiver is time differences of multiple satellites, which by triangulation will yield a 3-dimensional spatial coordinate on Earth. When such positional data are collected as a time-series, speed and ascent/descent rates (first time differentials) and acceleration (second time differentials) can be derived, which may in turn be used to make inferences on some limited activities as well as their location and whether the receiver was indoors or outdoors using the signal-to-noise ratio and an appropriate threshold (see Figure P.3.13).

Adding incline and land-use data to the classification scheme by projecting the GNSS track data into a GIS may further enhance the classification accuracy, e.g. if a participant was following a footpath or a railway line, it is more likely that the person is walking/running or travelling by train, respectively (Panter et al., 2014). Similarly, by combining GNSS with records from diaries/logs or time-stamped objective physical activity data, inferences on walking, running, cycling, and motor transport are enhanced, including estimation of activity energy expenditure (Costa et al., 2015, Nguyen et al., 2013, Panter et al., 2014). 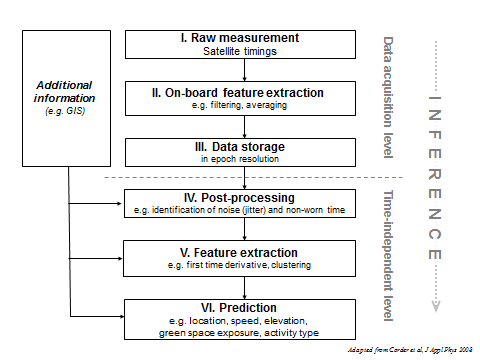 Characteristics of GNSS receivers are described in Table P.3.26.

Considerations relating to the use of GNSS receivers for assessing physical activity are summarised by population in Table P.3.27.

A list of specific GNSS instruments is being developed for this section. In the meantime, please refer to the overall instrument library page by clicking here to open in a new page.