Pedometers provide data on steps taken, and therefore, only really measure walking/running activity. They do not capture activities such as cycling, swimming, or weight lifting, nor do they capture the added energy requirement from walking on an incline or the decreased energy requirement associated with running down-hill. In the caloric sense, it is therefore not possible to assess intensity, frequency or duration of activity from pedometer data; however if these are defined in the ambulatory movement-only domain, a pedometer that stores step frequency information in high resolution (“time-series pedometer”) provides an estimate of those dimensions of activity. In contrast, a pedometer which only stores total number of steps (“simple pedometer”) can only assess volume. The dimensions of physical activity assessed by the two main types of pedometers are described in Table P.3.1.

One systematic review reported median correlation (relative validity) of r =0.86 for assessing total volume of physical activity when compared to different accelerometers (specifically uniaxial accelerometers), depending on the specific instruments used, monitoring frame and conditions implemented, and the manner in which the outputs are expressed (Tudor-Locke et al., 2002).

How is the assessment conducted?

Pedometers are low-cost motion sensors which respond to oscillations in the acceleration of the body segment (hip, thigh, wrist, etc) during gait cycles (Welk et al., 2000), providing output in number of steps during the given time frame (e.g., minute, hourly, daily, weekly).

There are wide variations between pedometer instruments and this is typically reflected in their cost. The variation in cost and accuracy is related to the different internal mechanisms used to measure steps. There are at least four different mechanisms (Crouter et al., 2003; Schneider et al., 2004):

Some smartphone applications derive steps from the inbuilt accelerometer (famously used to orientate the screen in portrait or landscape) and/or global positioning system (GPS) receiver data; the former is based on a specific interpretation of the acceleration signal and the latter may be derived by dividing distance travelled by stride length (Orr et al., 2015).

A pedometer instrument consists of one of the above mechanisms packaged alongside other features, which can include:

Although many pedometers are designed and marketed for the specific purpose of measuring steps, other devices can also be classified as pedometers as they perform the same functions. For example, some devices sold as ‘accelerometers’ also provide a measure of steps, and as mentioned above smartphone applications are available which make use of in-built accelerometers as well as the more advanced storage, computing, and visual display options that this platform offers. Algorithms have been developed for measuring steps using raw tri-axial accelerometry data at ankle, thigh and waist locations across a range of gait velocities in a laboratory (Fortune et al., 2014).

Another study demonstrated that measures of steps were most accurate on level surfaces (≤1% for some devices), but less so during stair use. When estimates of distance were derived from steps, these were typically within 5% of true values, but during stair use error was at least 45% across devices (Huang et al., 2016). Accuracy of step count and distance was higher at slow walking speed, as previously reported (Crouter et al., 2003), but no differences were observed between moderate and fast walking speeds (Huang et al., 2016).

The frequency with which steps can be recorded (sampling frequency or time resolution) varies according to the sophistication of the device. Some pedometers are only able to store the accumulated total, making it necessary for participants to log step counts in a dairy on a regular basis (e.g. at the end of each day, or before and after a walking/running trip to work to measure steps during that trip). This reporting task and the fact that actual wear time may not be captured are potential sources of bias and lost data.

Newer models (time-series pedometers) have a large data storage capacity, ranging from daily to sub-minute level (time-series) recording, which is preferable for research purposes; for time-series data with high (< 60-sec) resolution, inferences can be drawn on other activity domains (intensity, frequency, duration, timing), as well as wear/non-wear probability.

Pedometers have been commonly worn on a belt around the waist or on a wrist band. However, as pedometers have become smaller and more often incorporated into other devices, wear locations have evolved, for example, some devices can be kept in pockets (e.g. smartphones) or worn at chest, thigh or ankle locations.

A study investigating the comparison of chest-, hip- and wrist-worn measured step counts vs manual counting across a range of walking and running speeds showed a higher agreement of chest and hip placement when compared to wrist (Diaz et al., 2016).

Typical gait velocity should be considered for wear location of different devices. More sensitive pedometers (e.g. based on piezoelectric or MEMS-based acceleration measurement) have been recommended in individuals who naturally ambulate at a slower pace e.g. the elderly (Melanson et al., 2004). Measurement of steps at slow gait velocities is reportedly more accurate at the ankle than at hip, wrist or chest (Klassen et al., 2016; Pomeroy et al., 2011).

Comparison of pedometers over fixed distances or at a variety of treadmill speeds is not reflective of their performance in free-living conditions [awaiting reference].

Smartphone applications which mimic traditional pedometer instruments are increasingly popular. Use of smartphones for physical activity assessment is appealing due to increasingly high ownership levels and limited increase in burden for participant, as well as being cost effective and convenient for researchers. They may also be beneficial for self-monitoring and behaviour change.

There is a plethora of available applications using smartphone technologies such as accelerometers and/or GPS receivers to estimate steps, and are designed to perform this task regardless of what phone (and therefore sensors) is being used and whether the phone is carried in bag/purse, armband, hand or pocket. Those that have undergone validity testing have performed relatively poorly when compared to observation of steps and measurement using a dedicated pedometer (Orr et al., 2015) Analyses found large error across a range of laboratory and free-living testing, including walking, running, stair use and driving. This was typified by the performance in a 20-step test as shown in Figure D.3.2 (Orr et al., 2015). 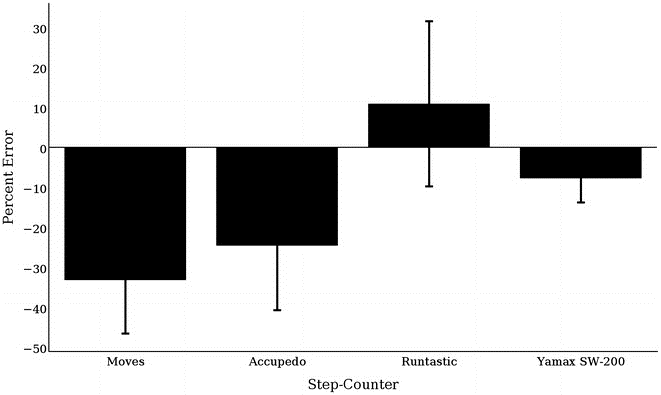 Walking is one of the most common forms of physical activity and pedometers readily measure an important aspect of this activity. Investigators should consider the type of activities the studied population are likely to engage in. If it is predominantly walking then a pedometer may be suitable.

The typically low cost of pedometers makes them feasible for large-scale studies (i.e. >1000 subjects), and this economic feasibility means that pedometers may also be considered for surveillance. They can be used to:

Pedometers are useful in clinical and community-wide intervention seeking to increase activity and have been successfully used as an incentive to increase activity through walking. The ‘Rockhampton 10,000 steps a day’ (Queensland, Australia) and the Colorado (Denver, USA) ‘On the Move’ programs have led to state/country wide programs to increase activity. Bravata et al. (2007) systematically reviewed the use of pedometers as an intervention tool to improve physical activity levels. The results suggested that the use of a pedometer is associated with significant increases in physical activity.

How are estimates of physical activity derived?

Distance walked during a given time period has been estimated from number of steps by multiplication of average (assumed) stride length. The accuracy of this estimate depends upon several factors, such as accuracy and variability of the stride length parameter. Some pedometer models allow for a low level of individual calibration; the participant walks a set distance and count the number of strides taken, from which average stride length is calculated and entered into the device. Pedometer step recording accuracy is influenced by body size and speed of locomotion so should be used with caution in populations of vastly different ages and heights (Trost, 2007).

The following classification of overall physical activity based on steps has been suggested by Tudor-Locke (2004):

Various recommendations have been published for healthy children, all greater than 10,000 steps per day which is a commonly cited step target for adults. For example, boys who accumulated 13,000 steps.d-1 and girls who accumulated 12,000 steps.d-1 were found to engage in sufficient moderate physical activity to meet recommendations for 60 minutes of moderate activity per day as measured by accelerometer (Rowlands et al., 2005).

An overview of the characteristics of pedometer methods is outlined in Table P.3.2.

*only in combination with diary

Considerations relating to the use of pedometers for assessing physical activity are summarised by population in Table P.3.3.

A list of specific pedometer instruments is being developed for this section. In the meantime, please refer to the overall instrument library page by clicking here to open in a new page.