Contents
What is assessed?
How is the measurement conducted?

The CT scanner is typically a large, box-like machine with a central aperture. The participant lies on an examination table that moves into and out of a short tunnel. Rotating around the participant, the X-ray tube and electronic X-ray detectors are located opposite each other in a ring, called a gantry. The X-ray beam is attenuated as it passes through the tissues before reaching the detectors opposite. As the X-ray beam is rotated around the participant, information on the intensity of the attenuated X-ray beam is collected and stored. The X-ray creates cross-sectional slices from 1-10 mm thickness through the participant. Complex algorithms are then applied to build cross-sectional images of the body, which can further be processed into 3D images.

The computer workstation that processes the imaging information is located in a separate control room, where the technologist operates the scanner and monitors the examination in direct visual contact with the ability to hear and talk the subject with the use of a speaker and microphone.

The intensity of the attenuated X-ray beam is expressed as a CT number (also known as the linear attenuation coefficient, or attenuation value). This number is a measure of attenuation relative to air and water expressed in Hounsfield units (HU):

Cross-sectional CT images are made up of pixels 1 mm by 1 mm square. Each pixel has a CT number or HU, which gives contrast to the image. Each pixel has a HU value on a gray scale that reflects the composition of the tissue. Low HU values correspond to low values for tissue density. Lower densities appear black (e.g. fat) and higher densities white (e.g. bone and muscle).

To reduce radiation exposure, cost and processing time, a single slice CT image can be used to assess visceral adipose tissue (VAT) and subcutaneous adipose tissue (SCAT). In adults, the single slice is often performed at the level of the L3 vertebral body. However, this method is less accurate than whole abdomen imaging as the inter-individual variation in the distribution of VAT and SCAT across the abdomen is not captured by a single slice alone.

Studies of the whole abdominal region (from T10-T11 to L5-S1 vertebrae), or multiple slices from it, give a more robust estimate of adipose tissue deposition compared to single slice analysis.

Correlations of 0.89 to 0.99 between single scans and the average values for all scans show that a single CT image contains the same information on adiposity as a series of scans.

The following parameters need to be verified with a radiographer prior to image acquisition:

The method has been primarily used in smaller laboratory-based studies. However, it has been applied to population studies, like the Health ABC study, which collected both abdominal and midthigh CT images from approx. 3000 older individuals, and the Framingham Heart Study, which used abdominal multi-detector CTs in over 3500 individuals.

Practical and ethical constraints limit the general use of CT in body composition assessment.

Due to the exposure to ionizing radiation (10 mSv, the equivalent of 100 chest X-rays), the following are avoided:

CT, together with MRI (Magnetic Resonance Imaging) is generally used to validate other methods designed to estimate adipose tissue and skeletal muscle. 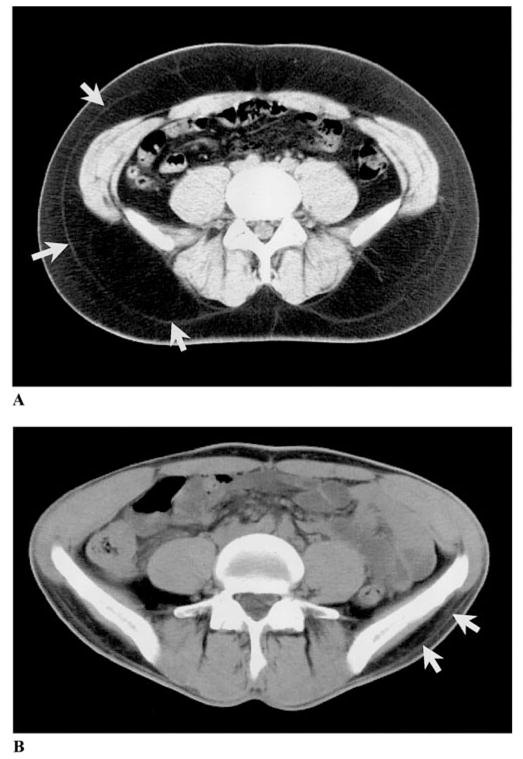 An overview of the characteristics of computed tomography is outlined in Table 1.

Considerations relating to the use of CT in specific populations are described in Table 2.

*Because foetus’ and children are more sensitive to radiation, they should have a CT exam only if it is essential for making a diagnosis and not for body composition, unless absolutely necessary and justifiable. Refer to the further considerations section. If CT is used to assess abdominal adipose tissue, a single site is preferable due to concerns with radiation exposure. In children, a single slice higher than L4-L5 level (typically L2-L3 in girls and L1-L2 in boys) has been shown to better represent visceral adipose tissue in the abdomen.

What are the radiation risks from CT scanning?