Dual-energy X-ray absorptiometry (DEXA) is an imaging technique. It provides whole body and regional estimates of the three main body components: fat, lean soft tissues and bone mineral mass. Some software can estimate visceral fat from the android/abdominal region (validated only in adults).

The instruments use a source that generates X-rays at two different energies, a detector, and an interface with a computer system for imaging the scanned areas of interest. The differential attenuation of the X-ray beam at these two energies is used to calculate the bone mineral content (BMC) and soft tissue composition in the scanned region. DEXA uses ionising radiation but the effective dose equivalents of contemporary instrumentation are below or equivalent to background levels, allowing for safe longitudinal studies in both children and adults.

There are two approaches:

The difference in attenuation between the two energy peaks is particular to each element, and thus to each tissue. In all systems, the differential attenuation of the two energies is used to estimate bone mineral content and soft tissue composition.

There are different DEXA technologies:

DEXA manufacturers have different quality assurance (QA) and quality control (QC) procedures. These include the system’s calibration as well as testing some software features.

Training in DEXA operation, positioning of the participants and data management is essential to obtain reliable data. Training is generally provided by each company along with an electronic standard operating manual embedded in the DEXA software.

The measurement procedure is similar for each instrument: 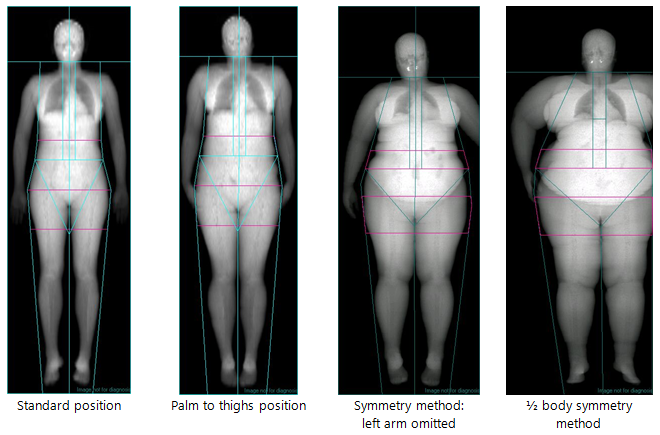 Assumptions associated with DEXA include: the assumed constant attenuation (R) of fat (R = 1.21) and of bone mineral content; minimal effects of hydration on lean tissue estimates.

Different DEXA systems have an automated placement/demarcation of the boundaries of the body regions. Although, readjustments may be required and the standardised protocol in Figure 3 can be adopted. 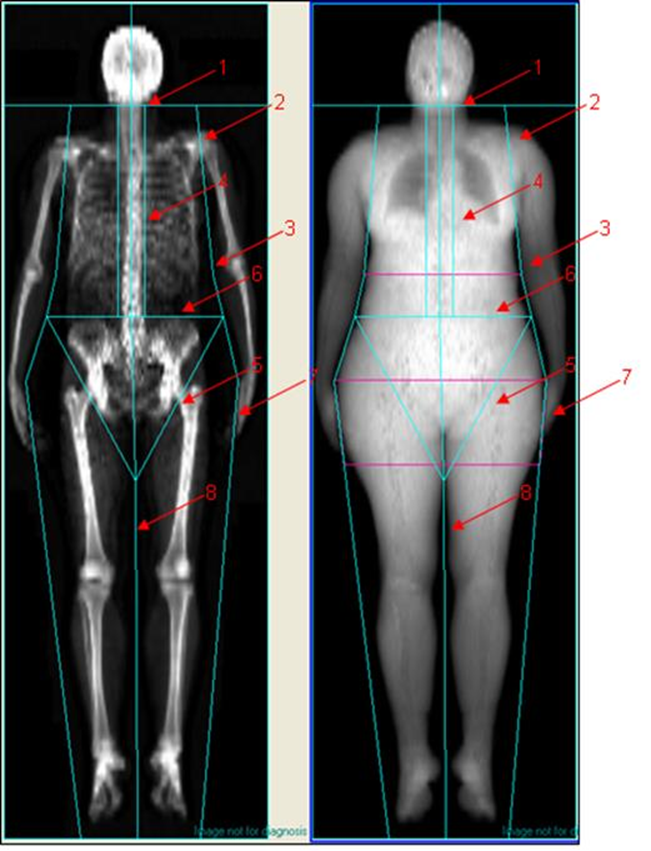 1: Head: the Head cut is located immediately below the chin.

2: Left and right arm: Both arm cuts pass through the arm sockets and are as close to the body as possible.

3: Left and right forearm: Both forearm cuts are as close to the body as possible and separate the elbows and forearms from the body.

4: Left and right spine: Both spine cuts are as close to the spine as possible without including the rib cage.

5: Left and right pelvis: both pelvis cuts pass through the femoral necks and do not touch the pelvis.

6: Pelvis top: The pelvis top is immediately above the top of the pelvis.

7: Left and right leg: Both leg cuts separate the hands and forearms from the legs.

DEXA data are stored in databases inbuilt within the DEXA systems such as Microsoft Access and SQL. A data extraction tool can be set up to access the raw data and reconstruct body composition variables where necessary.

The raw data includes estimates of: 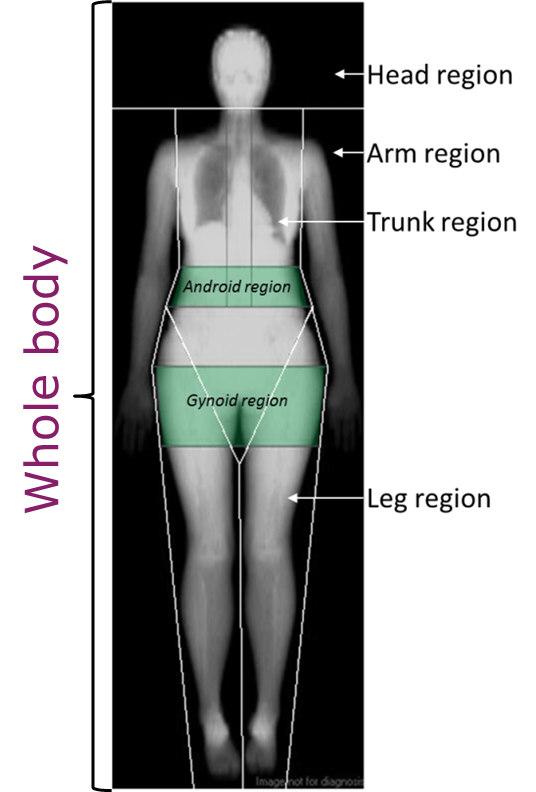 Some software allows automated estimations of body composition for scans where the symmetry method was applied (e.g. arm omitted from scanning area or half-scan analysis). However, it is preferable to switch this feature off as the estimation can occur even if, for example, small tissue is clipped from the scanning area.

The following steps can be followed to rebuild an individual’s body composition data, depending on which regions are omitted from the scan. After the missing tissue has been rebuilt, percentage body fat can be derived.

The procedure below removes the bone, the fat and the lean masses of the left arm from total mass, left total mass and left arm mass values and replaces it with the right arm values.

b) Calculations for 1/2 body symmetry method

Percentage body fat can then be derived using the following calculations: 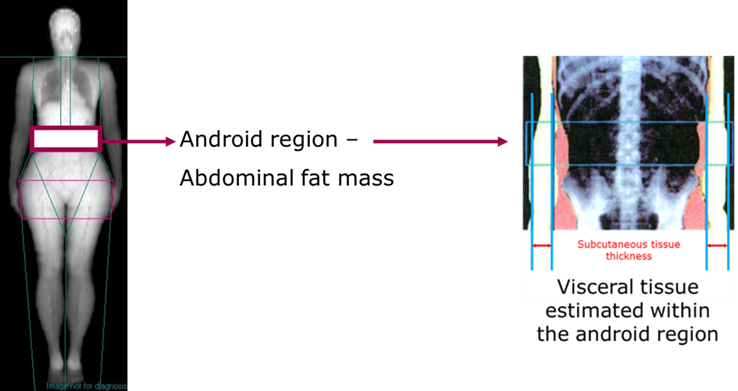 Further data can be derived, which are not given by the software automatically:

There are published translation regression equations to tackle the systematic differences in the absolute values of body composition variables between different manufactures [2, 9]. However, these equations have been derived from healthy individuals and they might not be generalisable to other populations. Cross-calibration study of different instruments is therefore recommended to derive translation regression equations.

DEXA was created for and continues to be used as a clinical tool to assess bone mineral density and bone mineral content to diagnose osteoporosis (thinner bones). Other body sites (e.g. spine, forearm and hip scans) are used for this purpose.

It is typically used in research settings to assess body composition in:

An overview of the characteristics of whole body DEXA scanning is outlined in Table 3.

CV: Coefficient of variation.
Adapted from: [3]. 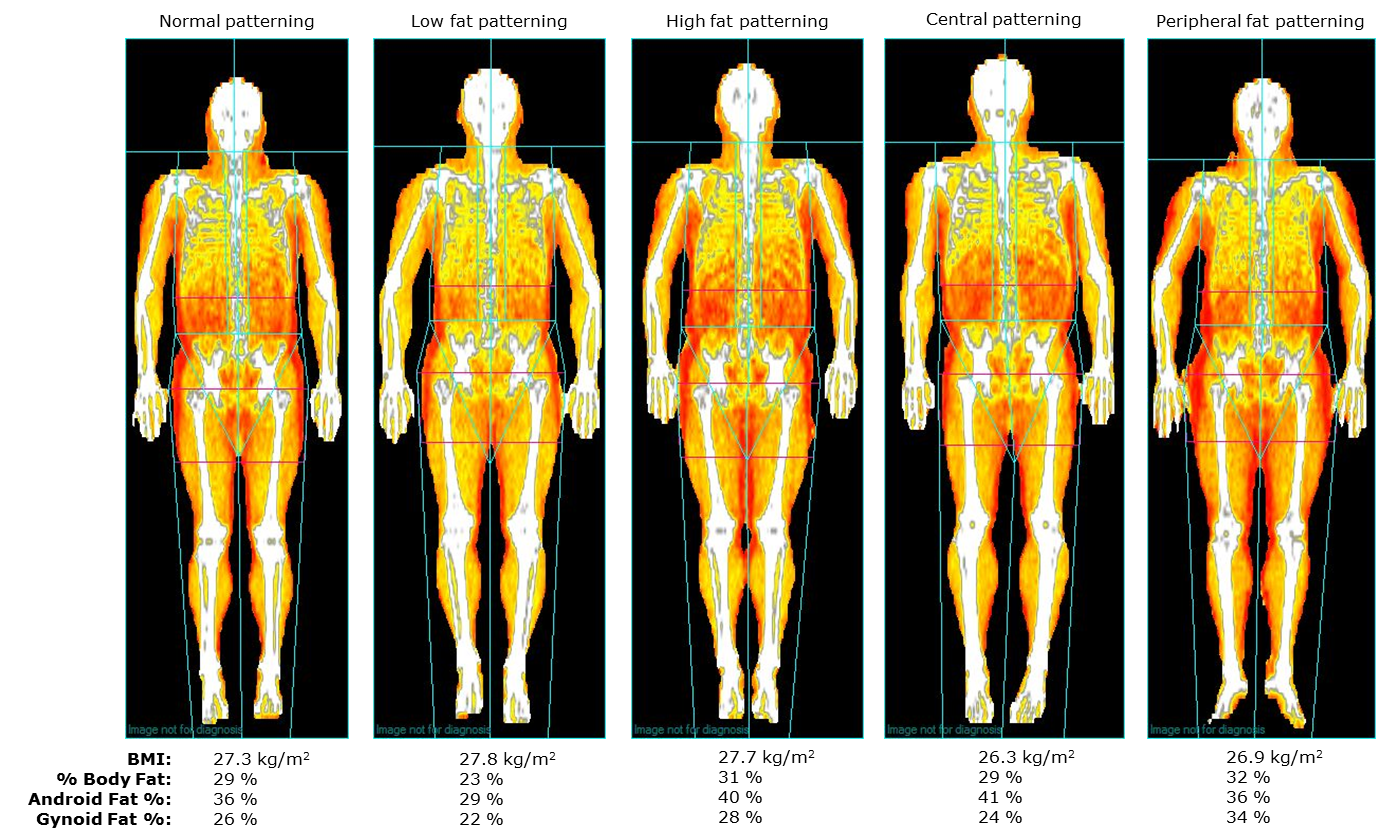 Considerations relating to the use of DEXA for anthropometry in specific populations are described in Table 4.