Hydrostatic underwater weighing is a form of densitometry (another being air displacement plethysmography), which derives body composition from body density and body volume. It uses Archimedes' principle of displacement.

An allowance must be made for residual lung volume (the air that remains in the lungs after a maximal exhalation) as this air increases the participant's buoyancy. It is measured using methods such as closed circuit dilution (including helium dilution) or nitrogen washout. If indirect measurement cannot be conducted, it can also be estimated from vital lung capacity or using published equations that are based on age, height.

Hydrostatic underwater weighing typically requires the participant to be completely submerged underwater while exhaling maximally to minimize the effect of buoyancy from lung air. Differences in residual volume determination have been reported to contribute the largest sources of variation.

After having measured or estimated residual lung volume, the participant's dry weight is measured wearing a swimming suit or running shorts.

If each test is performed correctly according to the recommended guidelines, hydrostatic underwater weighing has small percentage error (+/- 1.5% error), and has been labelled the gold standard assessment of fat mass/fat free mass. However, as it is mostly only available in research laboratories or university settings, it is generally used for research purposes and not applicable in clinical practice or in large-scale population studies.

It is used less frequently since the introduction of air displacement plethysmography as this technique is better tolerated by participants. 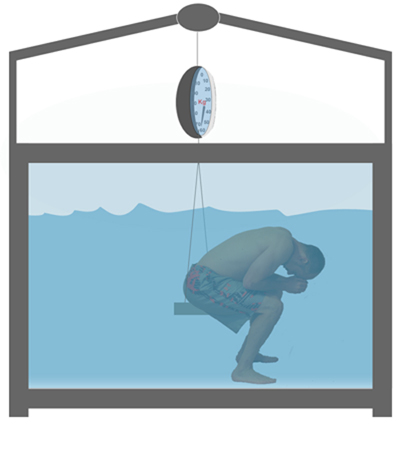 Body density is required to calculate percentage body fat. It is calculated using the following:

The substitution of these values in the given formula estimate the body density:

Once body density has been calculated from the data obtained, body composition can be estimated. The most commonly used equations for estimating the percent of body fat from density are as follows:

An overview of the characteristics of hydrostatic underwater weighing is outlined in Table 1.

Considerations relating to the use of hydrostatic underwater weighing for anthropometry in specific populations are described in Table 2.