Ultrasonography, or ultrasound, is an imaging technique and has been shown to be an alternative, non-invasive and reliable method to estimate visceral adipose tissue (VAT), subcutaneous adipose tissue (SCAT) and liver steatosis (fatty liver).

Ultrasound images are created by computer and digital memory from the transmission and reception of mechanical high-frequency waves applied through a transducer. The ultrasound waves spread through the body, producing an echo where density changes occur. For instance, in the case of human tissue, an echo is created where a signal passes from an adipose tissue region to a muscular tissue region. The echoes return to the transducer, where they are converted back into electrical signals that are amplified to form a digital image displayed on a monitor. Anthropometric outcomes assessed by USS (ultrasound scan) are summarised in Figure 1.

The procedure for the VAT and SCAT assessment takes approximately 10 minutes and should be undertaken at the end of a quiet expiration.

The waist (the midpoint between the lower rib and the iliac crest) is measured using a D-loop tape measure with the participant standing. In infants, the waist is taken at the same location, but with the baby/toddler lying quietly in the supine position on a flat surface. On the skin, the location where the xiphoid line intercepts the waist circumference is marked. This is the area (midline position) where the transducer is positioned for the intra-abdominal (visceral) and abdominal subcutaneous fat measurements (see Figure 1 and 2).

The visceral depth measurement is the distance taken from the peritoneum to the corpus of the lumbar vertebra.

The subcutaneous depth measurement is the distance taken from the skin and the outer edge of the abdominal muscles (linea alba).

There are other VAT protocols available in the literature:

The procedure for the SCAT assessment depends on the number of body sites included in the protocol, but generally takes between 10-20 minutes. The transducer must be applied to the skin surface with uniform and constant pressure to prevent soft tissue compression. Like the skinfolds method, ultrasound measurements of SCAT thicknesses can be obtained from various body locations:

The primary function of the ultrasound method is to assess soft tissue structures in clinical diagnoses. It is typically used in research settings to assess VAT, SCAT and liver steatosis when the reference methods, MRI and CT are not feasible.

It has been used in:

Output is provided in the form of VAT and SCAT thicknesses from the images, which are either in mm or cm, depending on the ultrasound system’s settings. Prediction equations to estimate abdominal fat tissues are available in black South Africans and white older individuals. However their applicability may not be feasible in other populations.

Output is provided in the form of SCAT thicknesses from the images, which are either in mm or cm, depending on the ultrasound system’s settings. As with skinfolds, total body fat can be estimated using several measures of subcutaneous fat thickness at the various body locations using prediction equations.

A semi-quantitative grading system is used to define normal echotexture (Figure 4) or mild, moderate and severe steatosis (Figure 5). The images can be scored at acquisition time if the operator is trained in the scoring protocol, or can be scored retrospectively.

The ultrasound images are scored according to standardised criteria, the liver steatosis scoring criteria are:

Each criterion is scored on a 4-point scale (i.e. as 1, 2, 3 or 4) and summed, resulting in cumulative liver fat score which ranges from 3 to 12. A score of ≤4 is classified as normal liver, 5-7 as mild steatosis, 8-10 as moderate steatosis, and score ≥11 was classified as severe steatosis. 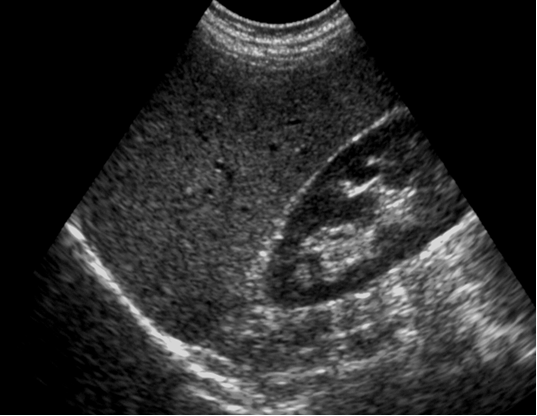 Figure 4 Normal liver echotexture. Longitudinal section through the right lobe of the liver. Similar echogenicity between liver parenchyma and the cortex of the right kidney. Intra-hepatic vascular anatomy is clearly visible and posterior aspects of the liver are well depicted.
Source: MRC Epidemiology Unit.

An overview of the characteristics of ultrasonography is summarised in Table 1. 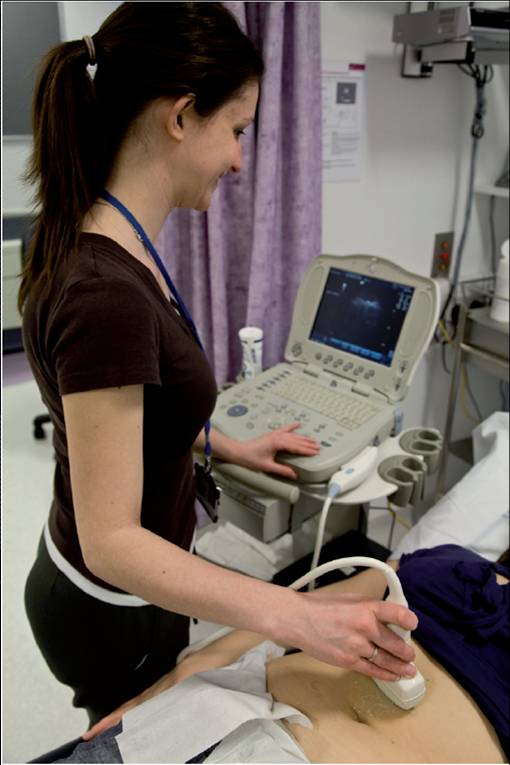 Considerations relating to the use of ultrasonography for anthropometry in specific populations are described in Table 2.

There are several commercial manufacturers of ultrasound systems. It is important to closely work with the ultrasound specialist from the company where the system has been purchased as the specialist will adapt the protocol settings to the specific instrument.

Specialised software (e.g. ImageJ) has been developed in the past years for the quantitative assessment of liver steatosis using the hepatorenal index. This index is calculated on the basis of the ratio between the echogenicity of the liver and that of the right kidney cortex using histogram echo intensity. The software performs a histogram analysis of selected region of interests (ROI) of the kidney and liver and displays various statistics including mean brightness and size in pixels. Kaustubh et al has also demonstrated that this index can be directly calculated using DICOM (Digital Imaging and Communications in Medicine) from a PACS and a mark-up region of interest which is available from the NIH website.

CAP-coupled Fibroscan®, a technology based on liver fibrosis, has also been developed. The Controlled Attenuation Parameter (CAP) specifically targets liver steatosis using a process based on transient elastography. It measures the degree of ultrasound attenuation by hepatic fat at the central frequency of the FibroScan® M probe simultaneously with liver stiffness measurement (LSM).