The skinfold method, the measurement of subcutaneous fat folds, is the most widely adopted field method for the assessment of body fat, especially in children.

It is based on the principle that fat is of a known density and by “summing” measurements of subcutaneous fat thickness across the body, total and regional fat can be estimated.

Skinfold thickness measurements are typically used to rank individuals in terms of relative total “fatness”, or to assess subcutaneous fat at various regions of the body.

In infancy, it might be the sole tool available for assessing body composition longitudinally as other methods may not be feasible, or may only be suitable for use at body sizes e.g. PEA POD, can only measure infants up to 10kg.

The skinfold method involves measuring the skinfold (subcutaneous fat) thickness at specific sites of the body using a skinfold caliper and a non-stretchable measuring tape to correctly locate the measurement area.

The cost of calipers ranges from £9 to approximately £300. For research purposes, calipers with a more refined scale (e.g. 0.1 mm intervals) and constant pressure of 10 g/cm3 between the jaws are desirable. Examples include the Holtain (see Figure 1), Lange and Harpenden calipers (see instrument library for more details). The Lange and Harpenden calipers have been used in developing prediction equations and reference values (Lee 1996 [20]). The Lange is most popular in the US, and the Harpenden and Holtain in Europe. 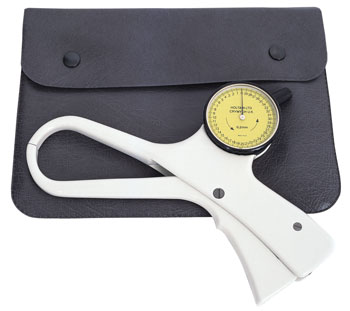 Typically a non-stretch fibreglass or plastic measuring tape (such as those used in circumference measurements) is used to locate the anatomical midpoints on the body where the skinfold measurement is taken.

Skinfold measurement can be obtained from 2 to 9 different standard anatomical sites around the body using a caliper, as shown in Figure 2. The subscapular and triceps skinfolds are the most commonly used. 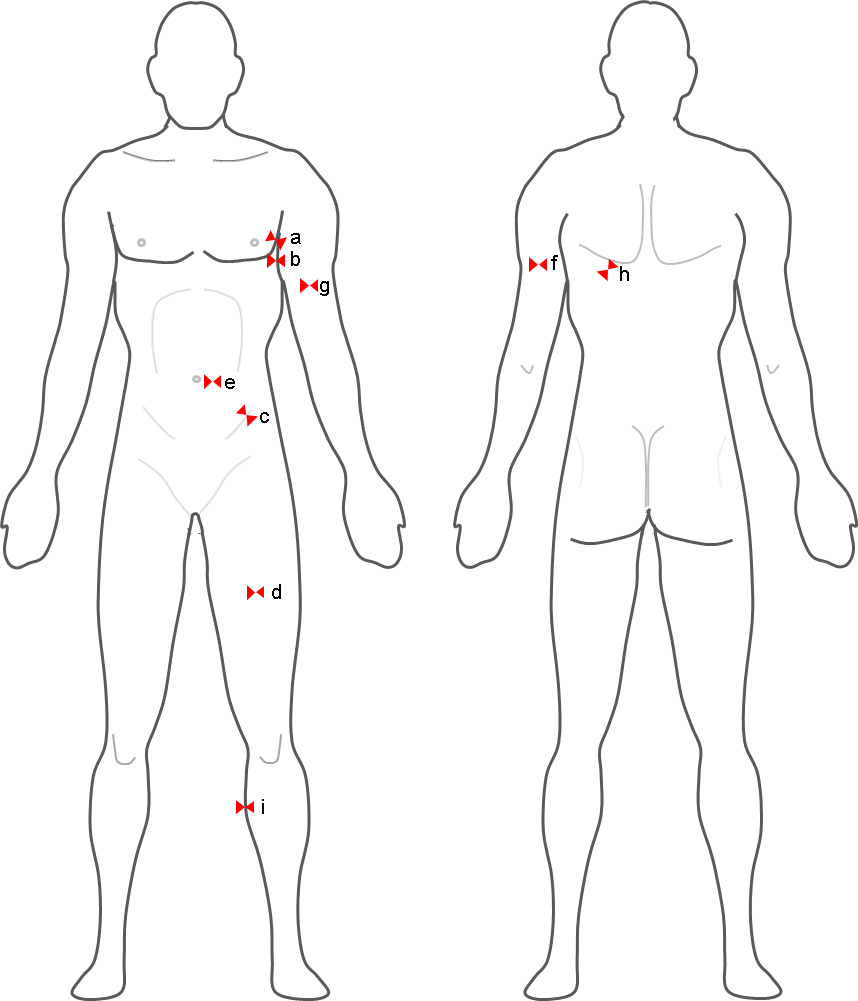 The following are the nine anatomical sites (as illustrated in Figure 2) that are most commonly used in the assessment of skinfold thickness:

An example of a calibration block with known thicknesses Figure 4 is used to calibrate skinfold calipers. Typically, calibrations are carried out on a monthly basis.

When is this method used?
How are estimates of body composition derived?

Skinfold thickness are typically recorded in mm. Some calipers record in both mm and cm. The skinfold thickness values should be quality checked during data processing in the same manner as other health related variables, for example by checking for outliers and data entry errors.

Raw skinfold thickness values are often used and they act as reliable indicators of regional fatness. In a similar way to body mass index (BMI), they can be converted into standard deviation scores (SDS) for longitudinal evaluations.

Body fat values should be generated from published equations which closely match the study population. It is critical that the equation selected for estimating body fat is appropriate to the demographics of the cohort under investigation (e.g. race, age, and gender).

Durnin Womersley (1974) developed general equations from a heterogeneous group of varying ages. The calculation of body fat % involves measuring 4 skinfold sites, triceps, biceps, subscapular and supra-iliac, and substituting the log of their sum into one of the following equations (Table 1), depending on the participant’s age and sex. The density value can then be converted to percent body fat (%BF) using Siri 1961 or Brozek 1963 equations described above.

Estimates derived using these equations have been compared to those from the criterion 4-component model (see Figures 5 and 6). The Durnin and Wormersley (1974) equation showed significant mean difference/bias of -2%, while the Jackson and Pollock (1985) equation showed mean bias of -6.6%. Both equations tend to underestimate body fat especially in larger individuals. Similar results have also been observed in men (Peterson et al., 2003). 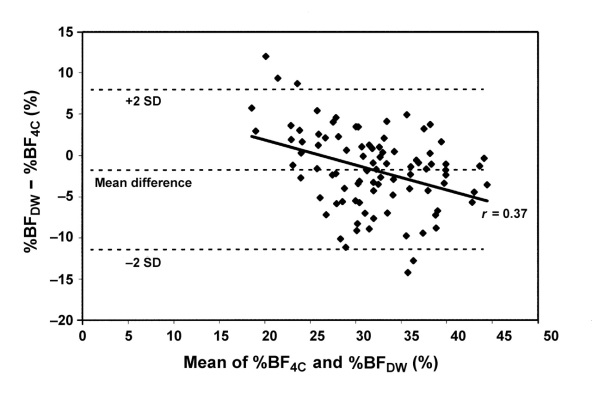 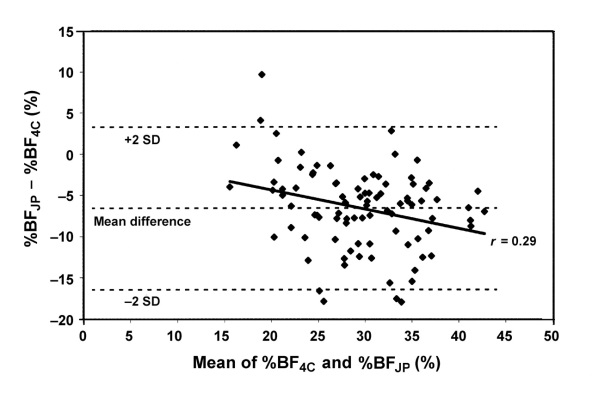 A priori, age- and sex-dependent regression equations published by Weststrate and Deurenberg (1989) that were derived from modification of the Siri (1961) equation (% fat = 495/density-450), are the most suitable for the estimation of % FM in children and adolescents:

However, Slaughter et al. (1988) equations proposed for pre-pubertal, pubertal and post-pubertal males and females are the most commonly used.

Some equations for children and adolescents have been compared with the criterion 4-component model, see Table 3. Significant bias for percentage body fat and fat free mass was observed for the equations by Slaughter et al. (1988), Johnston et al. (1988) and Brook (1971). No significant mean bias was shown by the equation by Deurenberg et al. (1990), but the bias was correlated significantly to fatness and limits of agreements were wide indicating that individual values are not accurate. This may affect the evaluation of body composition changes within individuals overtime.

Table 3 Bias and 95% limits of agreement for % body fat predicted using skinfold-thickness equations against measurements made with the 4-component model.

There are limited equations to use in infancy to derive % body fat and they tend to be population or age specific (e.g. first 10 days of life) and based on different skinfold thickness measuring sites.

The Deierlein et al. (2012), Catalano et al. (1995) and Aris et al. (2013) equations have been evaluated using air displacement plethysmography (PEABOD) at birth and 3 months, demonstrating significant bias for body fat in the equation by Catalano et al. (1995) at birth, and significant bias for body fat at 3 months for all the equations.

Table 4 Bias and 95% limits of agreement for % body fat predicted using skinfold-thickness equations against measurements made with the 4-component model.

*Significance for the correlation of the strength for the relationship between the mean of the criterion and each equation correlated to the difference between the equations estimated infant fat mass and the criterion measured fat mass. A non-significant correlation suggests no bias in the technique across the range of fatness.
Source: Clauble et al. (2016).

Equations derived in children have also been used to estimate % body fat in infancy, such as Deurenberg et al. (1989) and Slaughter et al. (1988). However, the relationship between total body density and skinfold thickness varies with age and those equations may not be applicable in younger groups.

Estimates derived using the Slaughter et al. (1988) equation have been compared to those from air displacement plethysmography (PEABOD) at 6 weeks and at 4.5 months of age, and to those from DEXA at 4 months. Agreement analysis showed significant bias at 6 weeks, underestimating percentage body fat by 2.4–8.9%. At 4.5 months, the underestimation was greater in infants with the highest body fat. The limits of agreement were wide; error ranged from 18% fat below to 9% fat above the PEA POD measurement. The agreement analysis between Slaughter et al. (1988) and DEXA shows a considerable systematic bias which increases with increasing % body fat. The equation overestimated % body fat by 10.7% when compared to the PEAPOD measurement (Lingwood et al., 2012; Schmelze et al., 2002).

Estimates derived from the Deurenberg et al. (1989) equation have been compared to those from DEXA at 4 months of age. The equation overestimated % body fat by 6.27% when compared to the DEXA measurement (Schmelze et al., 2002).

When analysing data in infancy, often the raw thickness data are used. The sum of the thicknesses is determined and internal standard deviation score (Z-score) are derived. Internal Z-scores can be generated by regressing skinfolds on age (and using the saved residuals), and then adjusting for sex in the analyses.

These indices are expressed in percentiles (percentage of median) and can be assessed by the percentile point achieved by a child relative to the healthy children of that age and gender in the same population. Median is regarded as a reference value, and 3rd and 97th percentiles as thresholds to indicate abnormally low or abnormally high values.

The indices can also be expressed as Z-score derived by using the formula:

An overview of skinfold thickness methods is outlined in Table 5.

Considerations relating to the use of skinfold thickness methods in specific populations are described in Table 6.

Table 6 Use of skinfold thickness methods in different populations.

To obtain reliable data from this method it is essential to standardize the procedure, train the participating staff and assess inter and intra observer reliability to monitor measurement error.