Head circumference (HC) is a measurement of the head around its largest area, typically measured on infants and children until the age of five years as part of routine child care. It measures the distance from above the eyebrows and ears and around the back of the head.

In children, this measurement forms part of a growth assessment to provide information on health, development and nutritional status (other measurements include height and weight). HC and the ratio between HC and weight for example, may also detect any abnormal brain or skull growth (e.g. hydrocephalus, microcephaly, macrocephaly).

HC is a simple, inexpensive and easily accessible tool for monitoring brain development and identifying infants at risk of neurodevelopmental disorders (Garcia-Alix et al., 2004). HC is often used in infants born small for gestational age (SGA). SGA babies and infants with a birth weight less than the 10th percentile are at an increased risk of perinatal morbidity, continued short stature, and metabolic alterations later on in life (Cho and Suh, 2016). Studies have shown that SGA infants present with a higher rate of growth for head circumference compared to their appropriate for gestational age (AGA) peers – i.e. SGA infants try to catch-up with AGA infants to undo the effects of nutritional insult experienced during gestation (Kaur et al., 2011).

HC is typically measured using a flexible but non-stretch tape, such as the Seca 212 measuring tape or Lasso-o Child Growth Foundation tape. The tape measure should be checked for correct assembly and any damage before each use.

The tape should then be placed over the child’s head above the ears and eyebrows on the most anterior protuberance of the forehead (frontal bone) and around the occipital prominence at the back of the head.

Figure 1 The occipital and frontal bones of the human skull.
Source: Infant and Toddler Forum 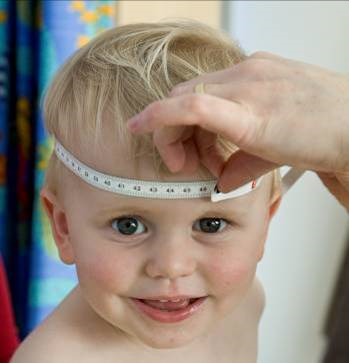 HC is used in clinical practice, in nutritional surveys and in epidemiological studies in combination with other anthropometric measures such as height and weight to provide an assessment of growth and development.

The relationship between HC and weight for example can identify if there is a need for further monitoring or investigation; a small head circumference with a low weight needs a different approach compared to a small head with a normal weight (GOSH Clinical Guidelines Online, 2017). Some studies have shown that HC standard deviation scores (or Z-scores) are highly correlated with those for height and weight, and this suggests that body size should be taken into account when interpreting the HC of a child (Geraedts et al., 2011).

Plotting HC on child growth standard charts can give an immediate indication of whether the child’s head, and therefore brain, is growing and a rate which is expected.

How are estimates of head circumference derived?

Standardized growth charts are used to plot HC each time it is measured throughout the first years of life. This can show how HC is changing over time and can highlight if HC is increasing too quickly or not quick enough.

The World Health Organization provides access to such charts up to the age of 5 years:

However, these charts must be interpreted together with age and special consideration must be taken for infants who were born prematurely. For example, an infant born 6 weeks early (at 34 weeks gestation) will have a corrected age of 6 weeks less than his/her actual age since birth. Their measurements should be plotted on the chart at their actual age, with a horizontal line drawn back to their corrected age. Adjustments for prematurity to be made until they reach one year of age. Early year UK WHO growth charts (rcpch.ac.uk)

The head circumference-for-age is typically used together with other growth indices to assess infants’ growth and development. It is often used in clinical settings as part of health screening for potential developmental or neurological disabilities in infants and young children.

This index is expressed in percentiles (percentage of median) and can be assessed by the percentile point achieved by a child relative to the healthy children of that age and gender in the same population. Median is regarded as a reference value, and 3rd and 97th percentiles as thresholds to indicate abnormally low or abnormally high values.

It can also be expressed as a Z-score derived by using the formula:

The WHO growth standard (2006) for head circumference for age is used for its interpretation.

An overview of head circumference methods is outlined in Table 1.

Considerations relating to the use of head circumference methods in specific populations are described in Table 2.

Table 2 Use of head circumference methods in different populations.